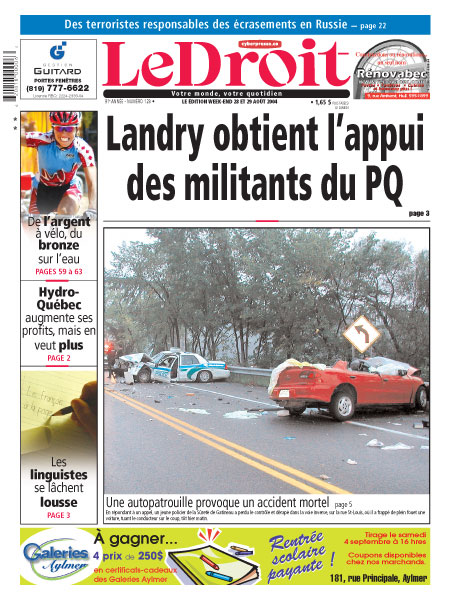 A good friend of mine, Ken Robertson, was killed in a car accident in the very early morning of August 27, 2004. Ken was driving home from work and was hit head-on by a police cruiser and he was killed instantly. Following are some saved links from various news sites reporting on the incident.

I’ve been asked a few times why I blog a letter to Ken every year (though I’ve missed a few, and several years are missing from an archive so I’m still looking), and my explanations are beneath the crash photo below.

Some news articles I saved as static HTML files from back in the day:

Ken was predeceased by his father, Ken Robertson Sr:

Also, “What will you be remembered for?”

Those who remember me from high school probably remember a quiet kid, someone who kept to himself and didn’t rock the boat very much. I was dorky, not terribly popular, and a pretty strong band/art geek. Those who knew me in college likely got a better look at who I was turning into: a sarcastic, goatee-sporting, trenchcoat-wearing, wannabe who had sharpened his wit to cut someone down at a moment’s notice. To anyone who remembers me from Ottawa, you probably remember a slightly withdrawn, but still just as sarcastic guy, who was trying way too hard to make a buck on the side.

Never Do Business With Friends

Along with a third friend, Ken and I ran a web hosting business. We each ran as seaprate entities: I was “wild web hosting”, Ken was “candigital.com” and Glenn had “ottawacomputer.com”. I played at being a sysadmin, learning devops as we went, setting up virtual hosting for what ended up being about 150 clients total over a few years. Nothing massive in scale, but successful enough.

Since I was fronting the bill for the server rent and bandwidth, I charged Ken and Glenn a monthly amount for each client. Glenn, as I recall, kept his client list small and managed well, and paid on time. Ken was not so responsible (or maybe it was just his clients), and Ken started owing me money.

At the time, Ken was trying to get his footing in the world, and like a lot of people, myself included, maybe wasn’t the most responsible with his money. After a while, I started being really hard on Ken, to where our friendship suffered, he started avoiding my calls and being online, and eventually I took it upon myself to take over his clients, making it even harder for him to be successful.

By the time I had moved to California, set up my servers in Los Angeles, Ken was way “behind” on money he owed me. I could totally afford to pay for the server rack space and bandwidth fees – my hosting business was never profitable that I recall but it wasn’t like I was going bankrupt. But I kept pushing Ken to pay me, kept taking his clients. In turn, he avoided me, worried that every phone call was going to start or end with asking him to pay me. At the time I justified it as teaching Ken to be responsible with his business income.

Self-Reflection Can Be Ugly

As I explain in one of my letters to Ken, I found myself confronted by another friend (Heather) about setting an example of being a Christian, but in retrospect, I often deal with the frustration and guilt of not being a better example to Ken. Or even just being a friend and letting the finances thing slide.

Later in the morning on August 27, 2004, I got a call from our mutual friend, Glenn, informing me that Ken was killed the night before. I would never have another opportunity to change how I treated Ken. The chance was lost. A flood of emotion overtook me as I examined my life, examined how I treated people, and I had to resolve to doing better, trying harder, on a conscious level every day.

I would be a better friend to people.

I would be more generous with my money as I was able.

I would be a better role-model.

I would be a better mentor.

Follow-up on the Crash

I’ve tried following up to one of the reporters that wrote one of the handful of articles about Ken’s death. It was reported that Ken’s car was making a long left curve on his way home from work, which would have been just past midnight on August 27, 2004, and that two police cruisers were headed in the opposite direction responding to a call. The article said the road was slippery from rain that day, and speculation was that the first police cruiser may have slipped out into Ken’s lane as it was making the long right curve, and made a head-on collision with Ken’s Cavalier, killing Ken instantly.

But I haven’t heard any follow-up on the accident since, other than that the officers in the cruiser that hit Ken were both badly injured but expected to live. Like Ken’s family, my heart goes out to those officers who at the time were 23 (driver) and 22 (passenger). Pretty young for something devastating like that. I hope that they have recovered well, and I hope that they’ve found and felt the peace and forgiveness of those left behind.

I’ve learned to find some peace in knowing that, like my high school friend Heather, Ken saw a good example of what a Christian life can be. And while I miss my friend terribly, I’ll never know the full extent of God’s grace until I meet Him face to face myself and get the answers to so many questions about life, and hopefully see Ken in Heaven too.

At the same time, I shouldn’t be content to think that being a passive example is enough. Jesus called us to be witnesses, to make disciples, not to stand around hoping our friends will seek answers on their own. We should be asking our friends where they stand with God, we should be inviting them to church, we should let them know undeniably what our position is on eternity.

I only hope I can live up to that challenge, because I’ll never know who else is watching…