i hate recruiters who straight up lie in their intros

This one is for you, Terry Nelson of Staff IQ in Denver CO.

Okay, here’s the thing about recruiters: they’ll do whatever it takes to find a candidate for a job, including straight up lie in their introduction emails to make you think you’ve chatted before.

Perhaps Terry hasn’t read my blog before to know that I’m a digital packrat and keep every email, or that it takes mere seconds to search his name and company in my archive to know that Terry and I have never spoken.

It’s been a little while since we spoke last

No, we have never spoken. Had Terry ever spoken to me in the past, I would have told him straight away that I don’t work with third-party agency recruiters.

The last resume you send is probably not current

That’s because I’ve never sent you one, liar.

If I were to submit a resume, and get placed at a job, this transaction will benefit his company financially, making his email a business solicitation, which falls under federal CAN-SPAM laws. There are several requirements to CAN-SPAM laws, one of which is that all senders must include a means to opt-out of future mailings which must be honored within a mandated period of time.

So I decided to contact SalesForce, from where he sent me this piece of spam, and asked that his account be revoked at that their company practices be examined for CAN-SPAM compliance: 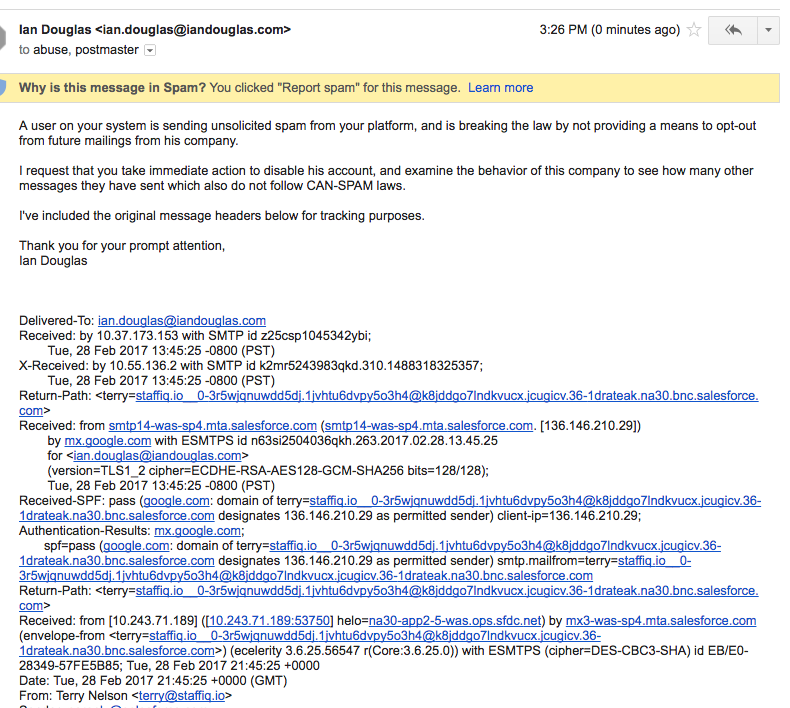 Do I have History with Staff IQ in Denver?

I got an Email from someone named “Steve Kang” back in June of 2015, who wrote his entire introduction to me in Comic Sans:

I promptly told him that Comic Sans was very unprofessional and that I don’t work with agencies:

Poor Steve was only at StaffIQ for 4 months and is on his second recruiter job since that role.

Turns out I somehow had a LinkedIn connection with someone named Charlotte Jensen at StaffIQ, which was quickly remedied today. I’m guessing she scraped my contact info for some internal database. I’ve had a handful of other connection requests over the years from others at their shop.