Why I backed Pebble at Kickstarter, along with 30,000+ others 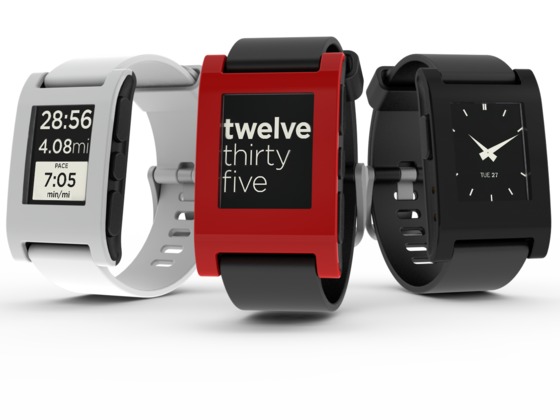 I forget if it was on Twitter or Goolge+ first, but I saw someone post about the Pebble Kickstarter and without even watching the promo video, I immediately backed the project, my first Kickstarter pledge. I signed up for the “Hacker Special”, to gain access to the early SDK and one of the devices in August before the September launch. When Kickstarter processed my payment, the funding round had 37 days to go and they had already hit $108,000 of their $100,000 goal. I was excited that they were already funded. I got about the 60th Hacker Special and the rest of the 100 they allocated sold out quickly.

Only a few days later, at the time of this writing, there are 31,516 backers (there were only 31,497 when I started writing the sentences above, that’s how quickly people are jumping on this!), and they’ve passed $4.5M in pledged funding, an average of $144 per pledge. It was interesting to read last night how Eric and his team went through the Y Combinator program to get started, but then fell flat on funding because none of the VC’s wanted to back a hardware project Were those on the VC panel out of touch, or do they see something that 31,000 other people haven’t seen yet regarding the success? Or are they all kicking themselves for not funding this themselves after all?

The Pebble just makes sense. It has a lot of simple features, and none of the overbearing things that Sony or Motorola have had to overcome. Here are a few thoughts on why I backed the project:

A simple e-ink display should last “7+ days” according to the developers. Frankly, I’m used to replacing a watch battery every year or so, and my current Casio watches are actually solar powered and may never need a new battery. While it’ll take some getting used to plugging in a watch to charge it, doing so once a week is not prohibitive.

According to the project notes I’ve read, they’re using a low-footprint real-time OS. Their previous project, inPulse, uses FreeRTOS, and their SDK will be a simple C-based development environment similar to programming for Arduino. Frankly, I’m not interested in having a full Android stack on a watch. If you look at devices by Sony, Motorola and imWatch, you’ll see how thick they are: some of them are half an inch thick. And all of them, if I’ve read their notes properly, may last up to 24 hours on a charge.

I don’t need a touch screen on my watch. It would add unnecessary complexity to the OS, expense on production, and really isn’t needed. The Pebble is meant to be a simple device. I’m happy with a 4-button control system.

I’m not that into fashion. I could give a rip about the multiple colors they produce. I’ll take the full black Pebble happily. But the Pebble design seems both modern and elegant at the same time. Simple is better.

I’m really looking forward to the Pebble. It’s a simple device, and that’s all a watch really needs to be. I don’t need a Dick Tracy device – my phone is a better tool for playing music, replying to SMS/Email, etc. All my watch needs to do is tell me the time, and display high priority notifications.

The enormous backing of the project clearly shows that there’s a market for smartwatches of some degree. I passed on the Sony and Motorola models, as well as the “i’m Watch” which I saw at Google IO last year, because I don’t believe a watch needs to run a full Android stack to be useful. If I’m going to reply to a text, I’ll use the phone itself; I don’t intend to listen to music from a watch; I don’t need games, etc., on the watch. I need it to tell me the time, it needs to keep good time, by itself, without needing constant synchronization, and needs to have basic watch functions like an alarm and stopwatch. Everything else is candy.

My biggest requirement in a watch, frankly, is that it stays synced with NTP or the atomic clock in Colorado, which my Android phone handles for me, so updating the watch itself with a new time periodically to correct for drift is the biggest thing for me. And using it as a vibrating alarm clock instead of an obnoxious beeping alarm would be far better for me in the mornings. And if I have to charge the watch one night a week instead of wearing it to bed, then hey, that’s the morning I sleep in.

There are certainly trade offs with such a simple RTOS design, instead of a full Android stack, of course. Would it be handy to have full apps? I suppose it depends on the app, but I don’t envision myself reading Tweetdeck or doing web browsing or playing Crush the Castle, by Armor Games on a 144x168 pixel screen. Trying to be “all things to all people” is why Sony, Motorola and imWatch have to charge outrageous money for their devices (granted, Sony recently put their device on sale for about $120, I wonder if in response to Pebble). The flip side is that chances are good that I’ll have to write apps both for the Pebble and Android to keep things sync’d between my devices.

When the project hit $1M in funding, they decided to make a design change and make the device waterproof. At $2M they announced that everyone would get access to the SDK early. At $3M they teased us that more news would be coming soon, and they pinged everyone again to let us know they are officially the most funded project on Kickstarter. Now that they’re up to $4.5M, it’ll be interesting to see what other changes they make.

How would I spend their money? Glad you asked.

Lots of people are asking for Bluetooth 4.0 which would give the Pebble far more reach in the market than restricting it to iOS and Android only. The team has even said they can’t support WP7 because WP7 doesn’t support the necessary Bluetooth functionality. That sounds fishy to me. BT4 would make the Pebble more generic for sending/receiving information.

Inductive charging would be amazing, but that coil takes up space and I imagine they’re already cramped for room.

I’d love to see them change to a micro USB charging port instead of their planned proprietary plug. In this day and age, it doesn’t make sense to spend money developing and maintaining proprietary plugs any more. Granted, the magnetic plug is useful for maintaining the waterproofing, but I’d be fine with a non-waterproof model with micro USB.

I’d love to be a beta tester for their SDK and Emulator to get a jump start on apps. Releasing the SDK in August for a September release will make developers feel rushed.

(by the time I finished writing this, Pebble’s backers are up +200 to 31,706 in the time it took to write this simple blog article)

I’ve had an on-again, off-again relationship with my Pebble watch. I wore it for a really, really long time, until I was given a Moto 360 at Google IO one year. I removed my Pebble, banished it to a drawer, and didn’t even think about it for a few more years. But I grew weary quickly of charging a smartwatch every night, and eventually went back to my old Pebble. But in the summer of 2016 I decided that even recharging once a week was a pain, and I went back to wearing a plain ol’ Casio watch.