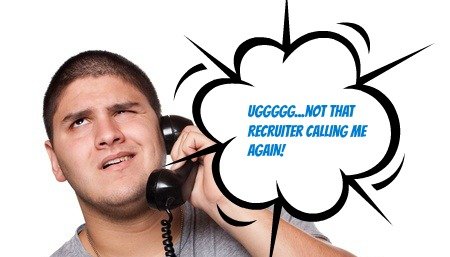 I got a LinkedIn connection request this morning from a recruiter from Zynga, who said:

Well for starters, I usually only “connect” on LinkedIn with people I’ve personally worked with in the past, know on a personal level, or a handful of recruiters who have actually placed me successfully at a job, or that I (gasp) respect. Secondly, why not send a LinkedIn InMail instead of a connection request that says you do NOT want to connect?

I tweeted a response that got some laughs from friends:

Got a linkedin conn from Zynga recruiter telling me not to be so negative towards recruiters. Okay, then. How's that IPO working out for ya?

I admit I’m pretty harsh on recruiters, especially this open letter to LinkedIn, and the entire section of my web site dedicated to some of the worst recruiters/headhunters I’ve dealt with over the years. I get a chuckle whenever an interview candidate does their homework on me as the interviewer and they comment on my headhunter nightmares. I’ve even had recruiters reach out and say “Hey, I’m not trying to recruit you, just wanted to say I got a huge laugh at your headhunter nightmares, hopefully I never do that.”

I figured that I should take a few moments to actually explain why I’m so hard on recruiters who contact me.

My first dealings with recruiters was in the spring of 2000, when a recruiter in Los Angeles placed me quite successfully at a startup who, right before the dot-com boom of early 2001, paid to move me to the US from Canada and it remains the longest time I’ve spent at any one job. (until my stay at SendGrid in 2011)

Until I actually moved to the US, recruiters didn’t want to bother with me, despite my growing skill set.

Once I got down to Los Angeles, I couldn’t even sneeze on the internet without recruiters trying to entice me away to some new “amazing opportunity”. Most of them didn’t even want to bother spending time to build a relationship with me as a potential recruit. And almost all of them say something along the lines of “I’m not that kind of recruiter”. If you’re not a typical recruiter, why are you trying to pitch me on a job opportunity in your second breath?

There ARE Good Recruiters Out There

Enter Luis Rhee. We met through dice.com in early 2006. Luis took several months, a nice lunch, and several phone calls to discuss my career goals, dislikes, and opportunities, and 5 months later placed me at a marketing agency where I was mentored by someone I still admire and respect to this day. Luis and I have remained in contact off and on over the years, and he’s one of the few recruiters that I call when I’m thinking about finding new work.

In fact, Luis and one other recruiter are the ONLY recruiters I trust to give out names of friends who are actively looking for work. (Update 2016: Well, for senior-level devs…)

Some Firms Don’t Update Their Info, Though

Then there’s the recruiting agency, Workbridge/Jobscore, that placed me at SendGrid. They took their time, too, sort of, and it’s by far the best job in my career. Except they’ve reached out several times in the past 6 months trying to either recruit me away from SendGrid, or haven’t updated their information to realize I’m no longer at Armor Games, and think I’m a viable contact there to try to pitch recruits for job openings at Armor Games. Either way, pretty slimy, and I’ve had to start tracking down upper management there to get them to knock it off. Update 2016: We stopped using them as a recruiting source at SendGrid when they placed some candidates with us and called those new people back 3-4 months after being hired (ahem, after their 90-day waiting period to get paid by SendGrid) to recruit them away to other jobs.

My biggest beef with recruiters? The opening statement on my LinkedIn profile CLEARLY states that I’m not looking for work, and to please avoid contacting me about new job opportunities. But that hasn’t stopped many dozens of recruiters from sending me messages on LinkedIn asking if I’m open to a new opportunity. So I recently updated it, and I guess that’s what triggered the nastygram from someone at Zynga.

Dear Recruiters: Guess what? I’m STILL not looking for work. Recruiting attempts will be met with scorn and ridicule and possibly some harshly-worded Tweets in your direction. Also, I only add people I know in real life or have worked with at a previous job, so please don’t try to “connect” claiming we’ve worked together before.

Also, I’m relocating out of California in the summer of 2013. Please don’t waste my time, or yours, trying to convince me to stay in California.

Sadly, this didn’t work. And to this day I still get recruiters hitting me up to hire me away, as well as recruiters trying to get me back to California.

This past week at SendGrid, our office manager came by my desk and told me someone named “Andre” was trying to reach me. I know a few Andre’s, and asked her for more info, but she said the guy wouldn’t leave any additional information. Then he called back the next day saying that he was in the middle of talking to me and we got cut off, which is interesting since I was in a meeting at the time. Liar, Liar, thine pantaloons hath caught on fire.

She thinks he tried calling again to reach out to another employee, starting the phone call with “Yeah, can I talk to ____, I have a quick PHP question for him.” And after one other failed attempt, tracked down this employee’s wife online, and sent her a private Email claiming he was a friend of the employee and could he get a cell phone number to reach our employee.

This triggered a tweet-storm by me:

Man, recruiter slime kicked it up a notch at our office this week, calling our office manager trying to reach several employees.

One recruiter went so far as to track down an employee's wife's contact information asking for the employee's cell phone number.

Someone, whose Twitter profile says she’s a recruiter, started following me around the time I sent those tweets. After calling these tactics were “slimy” and she replied with this:

She also favorited the tweet about this “Andre” guy trying to get private contact information. Then we had this exchange:

Ruh-roh: a recruiter who started following me favorited my tweet about another recruiter contacting an employee's wife for contact info.

@iandouglas736 No worries...I wont call , or try to connect, I just thought it was funny.

Hopefully I’m not spreading bad ideas by talking about them…

I actually debated starting a recruiting firm years ago, to do things differently. Build and foster relationships with the recruits, and businesses, use my own technical skills to screen people, and use my networking and connections to help recruits find jobs they’re going to feel passionate about, not just finding them a paycheck so I get a commission. Then I sat down and really thought about what a day in the life of a headhunter must really be like, and decided to remain in development.

Recently, I read that programmers and other technology related workers are some of the most private, secretive people who sometimes go out of their way to having private information on the Internet because they don’t want to be harassed about new job opportunities. Workers who focus on Marketing and Sales tend to make themselves as public as possible, where programmers hide behind pseudonyms and Email aliases that give nothing away.

It must be equally frustrating for recruiters to find quality people, especially these days when it seems that only tech companies are the ones struggling to find workers while other industries face massive layoffs and closures. And being unable to reach people has to make their jobs especially difficult.

What’s A Company To Do? Use Recruiters Or Not?

In this day and age though, for we the programmers, jobs are plenty. Companies like SendGrid usually have dozens of open jobs. One of the biggest problems SendGrid has is geography. Their office in Orange, CA isn’t easy to get to for all of the talent in West LA or Burbank areas. So they’ve been upping their own game, hiring in-house recruiters, and relying less on outside agencies to find potential candidates. Then they opened more office space in Colorado, northern California, and somewhere in the UK. If you can’t convince them to join you where you are, go to where they are.

Should recruiting agencies go die in fire? Nah, I’m sure big corporations need them to attract people to less-than-glamorous jobs. But if you have a fun startup or small business, I would suggest you don’t waste your time. Instead, attend hackathons, sponsor meetups, get your name out there. Make your business about something people actually USE, and reach out to them. (We lost count at SendGrid how many employees came from other companies who used SendGrid’s services) Continue to foster a strong trusting culture within your company and your employees will bring more than enough referrals.